By the early C16th many countries across Europe were seeing rising dissatisfaction with the teaching and behaviour of the Catholic Church. John Wycliffe (1328 – 1384) championed reform of the Church with a return to a vow of poverty and following the teaching in the Bible.  He translated the 4th Century Latin Vulgate (Bible) into English so allowing a wider audience to have personal access.  His followers were called Lollards and were punished for their beliefs including being put to death.  Across mainland Europe others, such as Jan Hus (1369 – 1414), Petr Chelčický (1390 – c.1460), Girolamo Savonarola (1452 – 1498) and Desiderius Erasmus (1466 – 1536) were questioning aspects of the Roman Catholic Church.  These were joined by Martin Bucer (1491 – 1551), Martin Luther (1483 – 1546), John Calvin (1509 – 1564), and Huldrych Zwigli (1484 – 1531). The word Protestant was applied to those who criticised Roman Catholic teaching and practices.  They were considered heretics and if they did not repent could be put in jail for life or executed.

In England the Act of Supremacy (1534) not only made King Henry VIII head of the Church of England, replacing the Pope, but also granted him ‘…full power and authority from time to time to visit, repress, redress, record, order, correct, restrain, and amend all such errors, heresies, abuses, offenses, contempts and enormities, whatsoever they be….’.

Besides the dissolution of the Monasteries and Abbeys in the 1530’s and the resulting sale of their land and buildings, local church interiors were targeted.  Idols and decoration were seen as Popish so those together with rood screens, images, shrines, stained glass windows, and paintings were either removed and sold, defaced or destroyed.  Some items were purchased by Catholics and safely stored for later use.  Apart from the stained glass windows the buildings fabric itself were largely left undamaged. In many cases local people defended the Church buildings from being damaged.

The destruction continued during Edward VI’s reign from 1547 to 1553.

After the death of Edward VI Queen Mary as a Catholic re-instated the Pope as head of the Church.  Services were held in Latin, altars, and altar rails separating the congregation from Priests were re-installed as were some items previously sold or stored safely were returned.  Some damaged and defaced idols were replaced or repaired. Dissenting Protestant Church leaders were punished, fined, or made to resign.  Under the 1555 Heresy Act clergy would lose their living if they did not conform to Catholic ritual.  Hundreds of dissenters were imprisoned and tortured and almost 300 were burned at the stake. Over 800 fled to the mainland European countries where Protestant worship dominated.

At Marys death in 1558 Elizabeth 1st became Queen as she was the last surviving child of Henry VIII. She was raised as a Protestant.  She inherited a bitterly divided nation. She re-established the Church of England’s independence from the Pope but rather than calling herself ‘Head of the Church of England’ she took the title of ‘Supreme Governor’.  Between 1558 and 1563 she sought to find a compromise between Catholic and Protestants.  The Act of Uniformity in 1559 reintroduced the Book of Common Prayer in English but it was altered to accommodate Catholics.  Many Protestants welcomed the practicality of this strategy, but others wanted an even more changes.  These people became known as the Separatists or Puritans to differentiate them from those who identified as Protestants.

In 1570 the Pope issued a Papal Bull to excommunicate Elizabeth.  This led to a series of plots by Catholics at home and abroad. Each failed or was foiled.  Those caught were usually executed. Elizabeth turned a blind eye to English Buccaneers attacking and capturing Spanish ships returning from the New World with silver.  Despite Spanish protests these continued.  Eventually Spain declared war on England and the Armada set sail to attack England. It failed.  England supported the Dutch in their fight against Spain who had occupied large parts of the country.

The Puritans hoped James 1st would strengthen their cause when he succeeded Elizabeth in 1603 but he tried to maintain the status quo.  Dismayed by this and the introduction of the King James Bible in 1611 some Puritans left for the Netherlands to worship freely as they wished rather than risk punishment in England.  Others went to Switzerland and Germany.  During the English Civil War (1642 – 1651) many Church interiors were again targeted by the Roundheads.

An indication of the type of decoration that was lost from English Churches can be seen by examining the interiors of Roman Catholic Churches in Europe. On a recent trip to Malta, I was able to view many Catholic Churches.  All were richly adorned with wall paintings, statues, images, mosaic and marbled flooring endowed by named individuals. St John’s Co-Cathedral, in the capital of Valetta, was founded by the Knights of Malta in 1572 – 1577.  It was re-decorated by Mattia Preti in 1661 – 1661 in a Baroque style.

Note: On the Mayflower400 DVD we include footage of the interiors of Churches and how they changed over time, medieval wall paintings discovered in the late C19th, the magnificence of Angel Roofs that still survive today and interviews with academics and experts on the Reformation.

Order your copy of the DVD now. 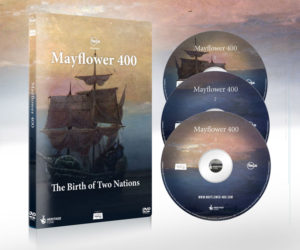